The Idoneth Deepkin are a mysterious race of aelves who dwell within the oceans of the Mortal Realms, emerging from their watery seclusion to plunder the souls of land-dwellers – a grim harvest upon which their very survival depends. When the Idoneth go to war, they bring with them a phantasmal manifestation of their pelagic home. From this shimmering tide of magic, cold-hearted aelven warriors and ferocious beasts of the abyss surge forth to overwhelm their disoriented prey. In their wake is left only an eerie silence, for any survivors are reduced to a blank-eyed stupor by the obliviating enchantments of the Deepkin.

This book contains everything you need to know about the soul-raiders of the sea, who command the power of the depths and the creatures of the ocean as they pillage spirit-essence across the Mortal Realms. Uncover the genesis of the Deepkin and the nature of their withering curse, and explore the mystifying world of their sunken cities.

– A deluge of background information on the mysterious Idoneth Deepkin, including their arcane origins and aquatic way of life.
– Ethereal artwork that displays the majesty of the Idoneth Deepkin
– 18 warscrolls and pitched battle profiles for Akhelian nobles, soul-starved Namarti Thralls, and vicious sea beasts like the Allopex or Leviadon
– Rules for the 6 primary Idoneth Enclaves, plus command traits, artefacts of power, spells, and battle traits such as Forgotten Nightmares and Tides of Death
– Path to Glory campaign rules that allow you to plunder the Mortal Realms in Idoneth soul-raids, plus 3 warscroll battalions for use in narrative play
– Matched play content including 4 grand strategies and 6 battle tactics to unleash against your enemies
– A showcase of abyssal Idoneth Deepkin miniatures assembled in the colours of their Enclaves, alongside guides on how to paint them yourself

The Fyreslayers are a culture of duardin whose entire existence revolves around battle, renowned for their short tempers and unrivalled skill with the axe. Many believe these grizzled mercenaries are little more than avaricious barbarians, for they will fight for any who meet their price in gold. The truth is stranger by far – they do not crave plunder purely for the sake of wealth, but to gather the scattered essence of their long-lost deity Grimnir, the ancestor god of battle.

The pages of this book contain everything you need to know about the Sons of Grimnir, who battle across the realms in search of ur-gold, with axes in hand and war-hymns on their lips. Learn the story behind the mythic feats and glorious death of their patron god, discover Fyreslayer Lodges across the Mortal Realms, and meet the duardin who inhabit them.

– A treasure trove of background information on the Sons of Grimnir. Find out how and why the Fyreslayers fight with such furious rage
– Incendiary art that shows off the battle-fury of the Fyresayers in all its glory
– 21 warscrolls and pitched battle profiles for every warrior of the Lodges, from fearless Berzerkers and mighty Magmadroths to the new Auric Flamekeeper
– Rules for 4 different Fyreslayer Lodges, plus command traits, artefacts of power, prayers, and battle traits like Grimwrath Oaths and Ur-gold Runes
– Path to Glory rules that allow you to take on Fyreslayer mercenary contracts to earn gold and reputation, plus 3 warscroll battalions for use in narrative play
– Matched play content including 4 grand strategies and 6 battle tactics to unleash against your enemies
– A showcase of glorious Fyreslayer miniatures assembled in the colours of the various Lodges, with guides on how to paint them yourself 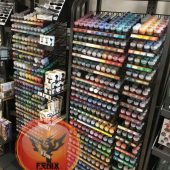